To keep track of my new work, exhibitions and what I am up to then simply enter your email here and my friendly penguin will update you with my latest news! Thank you

The sale of my work helps support the following projects & organisations:

An interdisciplinary and international organization committed to conservation and sustainable use of the world's coastal marine ecosystems.

Aiming to raise awareness of the plight of turtles and tortoises, EAZA brought its fourth annual conservation campaign to life in 2004: 'Shellshock'.

The Zoological Society of London

A charity devoted to the worldwide conservation of animals and their habitats. They aim to undertake and promote relevant high quality zoological and conservation.

Their vision is to advance our knowledge of the natural world, inspiring better care of our planet.

Their conservation aim is to promote the sustainability in fisheries and aquaculture.

Preparation of the Plate

Mezzotints are produced on copper plates. The entire surface of the plate is roughed 'rocked' with a tool known as a Mezzotint Rocker, which is shaped like a wide chisel with a curved and serrated edge. This is traditionally held in the hand at an angle of 45 degrees, I use a 'Rocking Pole' which at one end has a clamp that holds the rocker at the desired angle, at the other end is a bearing which runs up and down an angle iron. This allows for more control and the simplification of the rocking process which is very labourious at the best of times! By rocking the toothed edge backwards and forwards over the plate, a rough burr is cast up which holds the ink. Once this is completed, a drawing can be transferred onto the plate, using carbon paper.

When printed, the textured ground reads as a uniform dark; the areas to be lightened are scraped and burnished - therefore, working from dark to light - a reverse technique to etching and engraving. Little can compare the Mezzotint in the richness of its blacks; it is unique among the intaglio printmaking processes.

The preparation of the plate can take 25 hours or more before the artist can start work on the design, but the beautiful, soft velvety finish is so unique to the mezzotint process that it more than justifies the skill and patience involved. In the 18th Century, small boys were employed to 'rock' the plates up and the extreme tediousness of the work, combined with the poor pay and working conditions, sent many of the poor things into mental decline, hence the term "off one's rocker".

The history and preparation of the Mezzotint plate

Ludwig von Siegen, an amateur printmaker in the 17th Century, first invented mezzotint, or 'half tone process'. This was found to be especially useful for the reproduction of paintings; due to its ability to capture the subtlest gradations of tone from rich, velvety blacks to glowing highlights. The technique was perfected by Prince Rupert of the Palatinate, an accomplished artist and son of Frederick V of Bohemia and nephew of Charles I of England. He was able to travel freely throughout the European courts, thus meeting many continental artists. His many contacts with the royal court in England undoubtedly accelerated the reception of the mezzotint process enjoyed there. The mezzotint became popular, and was often referred to as 'The English Manner'.

The next step is The Printing Process 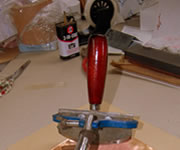 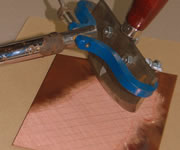 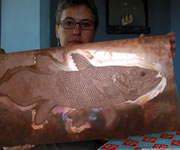